Members of the Vietnamese women’s football team have been called the “diamond girls” by Prime Minister Pham Minh Chinh. They have been rewarded for their great achievement – gaining the right to attend the 2023 FIFA Women’s World Cup. 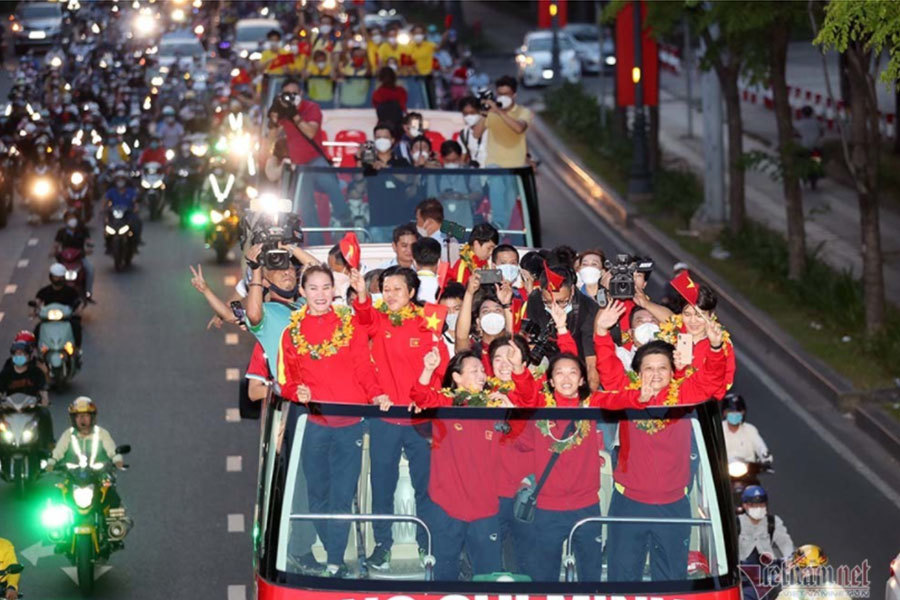 This shows the society’s recognition of their great efforts but it’s still necessary to reconsider the policies on the state’s encouragement and treatment of women players. What they received were just medals from the President, certificates of merit from the Prime Minister, and modest bonuses, even though they struggled so courageously to obtain a seat at the FIFA (International Federation of Association Football) Women’s World Cup for the first time. The impressive accomplishment has been praised by millions of fans.
The policymakers in the sports sector appear to be behind the times when rewarding athletes. However, they are not only to blame but also agencies at higher levels as well. It is not very likely that the agency managing the State budget will approve the idea of offering bigger bonuses to athletes.
Policies
It seems that policymakers still dare not think that national football teams, including men’s and women’s, and futsal team will obtain the right to attend the World Cup, so they have not set up reward levels commensurate with the achievements of the teams.
In 2016, Vietnam’s U19 football team obtained the right to attend the U20 World Cup. But since then, there has been no proposal on amending the policies on rewarding footballers.
In fact, Decree 152/2018/ND-CP on the treatment of coaches and sports athletes during the training and tournaments issued in November 2018 clearly stipulates the reward levels for every achievement. The rewards are better than those in the old regulation.
The athletes who win gold, silver and bronze medals at the World Olympics can receive bonuses of VND350 million, VND220 million and VND140 million. An additional bonus of VND140 million is offered to those who break old records.
The decree also stipulates other reward levels for athletes attending other tournaments around the world including in Asia and Southeast Asia.
However, it’s very difficult for Vietnamese sportspeople to obtain such medals at international tournaments, where the competition is stiff.
Modest wages
Local newspapers report that the total bonus promised for the members of the Vietnamese women’s football team had reached VND23.155 billion as of February 10. The localities where footballers live also promised to give bonuses.
The money they receive is from the football federation, businesses and sponsors. What would they receive if there was no such sponsor?
Female footballers don’t lead easy lives. When they leave their profession later, they will have difficulties if they don’t have another career.
The wages offered to female footballers by clubs are very low. Those who play for clubs in large cities such as Hanoi, HCM City, Quang Ninh and Ha Nam, can get VND5 million a month after deducting money for meals. Those who play for small clubs in other provinces receive several million dong.
In order to have more money to cover basic needs, buy cosmetics and sun cream, they have to spend less money on meals. And this affects their nutrition regime which in turn affects their training and competition capability.
Nevertheless, despite difficulties and modest wages, they still play with all their heart. Their achievements show their passion to contribute to the development of Vietnam’s football.
Now is the right time for the State to amend the reward policy to encourage national teams’ members, rather than keep relying on benefactors and sponsors.
The diamond girls have “made history” and “worked miracles’ by earning the right to attend the 2023 World Cup.
Quoc Phong
Coach Mai Duc Chung and his players were warmly welcomed at Hanoi’s Noi Bai International Airport this morning after earning historic 2023 World Cup berth at the 2022 AFC Women’s Asian Cup held in India.
Tags: