On episode seven of the sixth season of Dana White’s Contender Series, the UFC President awarded contracts to four of the night’s five winners, with the U.S. Virgin Islands’ Karl Williams joining a trio of Brazilians on the roster, as Vitor Petrino and the Bonfim brothers, Ismael and Gabriel, all secured deals after impressive wins.
MORE DWCS WEEK 7: Preview The Card | Weigh-In Results
Vitor Petrino of Brazil reacts after his knockout victory over Rodolfo Bellato of Brazil in a light heavyweight fight during Dana White’s Contender series season six, week seven at UFC APEX on September 06, 2022 in Las Vegas, Nevada. (Photo by Chris Unger/Zuffa LLC)
It took longer than their first fight, but the result was the same, as Vitor Petrino closed out this week’s DWCS show with a second-round knockout of Rodolfo Bellato in a light heavyweight bout.

Petrino put it on Bellato on the feet early, leading to a takedown attempt by Bellato, who wound up on his back. Bellato did almost catch his foe in a triangle choke, but Petrino slammed his way out of it and landed some hard shots before the two stood. More big shots from Petrino followed, but with 1:40 left, it was Bellato scoring the knockdown with a right hand. Bellato took Petrino’s back as he rose, and they were soon on the mat again, and Petrino eluded trouble and went back to firing off power shots to the horn.
Petrino came out swinging in round two, but Bellato took it and clinched against the fence. Once separated, Petrino kept pressing offensively and Bellato’s face showed it, and with under 90 seconds to go, a left hand dropped Bellato and a right hand on the mat ended it, with referee Mark Smith stepping in at 3:36 of the second round.

Petrino moves to 7-0 with the win. Bellato falls to 8-2, with both losses coming to Petrino, who stopped him the first time in May 2019.
Gabriel Bonfim of Brazil punches Trey Waters in a welterweight fight during Dana White’s Contender series season six, week seven at UFC APEX on September 06, 2022 in Las Vegas, Nevada. (Photo by Chris Unger/Zuffa LLC)
In a clash of welterweight unbeatens, Gabriel Bonfim made it a family sweep as he submitted Trey Waters in the first round to join his older brother Ismael in the DWCS winners’ circle.
Waters’ defense was spotty at best, but when he got his shots off in the early going, he was landing well.
Bonfim was more disciplined in his attack, but when he scored a takedown with just over a minute to go, he appeared to be in trouble when Waters locked into a guillotine choke. But Bonfim kept his cool and secured the Von Flue choke that forced a tap out at 4:13 of the opening round.

With the win, Bonfim moves to 13-0. Waters falls to 6-1.
Karl Williams punches Jimmy Lawson in a heavyweight fight during Dana White’s Contender series season six, week seven at UFC APEX on September 06, 2022 in Las Vegas, Nevada. (Photo by Chris Unger/Zuffa LLC)
Karl Williams took a short-notice opportunity and made the most of it, defeating Jimmy Lawson by way of a shutout three-round unanimous decision in a heavyweight bout.

Williams took the Penn State wrestler down in the opening minute and shockingly kept him grounded for the rest of the first round, landing enough strikes to keep referee Mark Smith from restarting the action.
It was another trip to the canvas for Lawson courtesy of a Williams takedown early in the second, and things started looking bleak for the favored Lawson as Williams took his back. With two minutes to go, Lawson found some daylight and reversed position, but soon it was Williams on top of his foe, landing hammerfists.

After a low kick by Williams opened the third round and prompted a brief halt to the action, Lawson moved forward but got tagged by his opponent, ultimately leading to more ground fighting controlled by the Georgia product, who left no doubt when it came for the judges’ scorecards to be read.
Ismael Bonfim of Brazil punches Nariman Abbasov of Azerbaijan in a lightweight fight during Dana White’s Contender series season six, week seven at UFC APEX on September 06, 2022 in Las Vegas, Nevada. (Photo by Chris Unger/Zuffa LLC)
Brazilian lightweight Ismael Bonfim got things off to a positive start for his family, as he defeated Nariman Abbasov via unanimous decision before his brother Gabriel took to the Octagon later in the evening in Las Vegas.

Scores were 30-27, 30-27, 29-28 for Bonfim, now 18-3. Abbasov falls to 28-4.
The 155-pounders were swinging hard from the start, with Bonfim’s leg kicks and body shots getting Abassov almost immediately. Midway through the opening round, a right hand upstairs stunned Abassov and a left sat him down, but he got up immediately and used his grappling attack to buy some time and clear his head. Once separated, Abassov was still pressing, but the harder shots were coming from the side of Brazil’s Bonfim, who had his foe in trouble again n the final minute, causing referee Herb Dean to take a close look before the horn intervened.

The pace dipped slightly in the second round, but the intensity of the action didn’t, as Abassov marched forward and Bonfim coolly countered. That pattern continued in the third, with Bonfim’s accurate striking and a late takedown securing his victory.
Tereza Bleda of the Czech Republic punches Nayara Maia of Brazil in a flyweight fight during Dana White’s Contender series season six, week seven at UFC APEX on September 06, 2022 in Las Vegas, Nevada. (Photo by Chris Unger/Zuffa LLC)
In the flyweight opener, Tereza Bleda defeated Nayara Maia via unanimous decision.

The 20-year-old Bleda only needed 15 seconds to put Maia on the mat, but the two battled evenly there until Bleda was able to settle into the Brazilian’s guard. Maia stayed busy from her back, ultimately catching Bleda briefly in a triangle, but the Czech Republic native quickly got free and ended the round in control.
After a brief visit from the doctor to Maia’s corner between rounds after she told her coach there was an issue, the fight continued, this time with Maia getting the takedown in the opening minute. The two quickly rose, Bleda controlling the standup until another trip to the mat which she dominated for the rest of the frame.

Bleda was a step ahead throughout the third round on the ground and the feet, dropping her late and nearly getting the finish, but the tough Brazilian made it to the final horn. 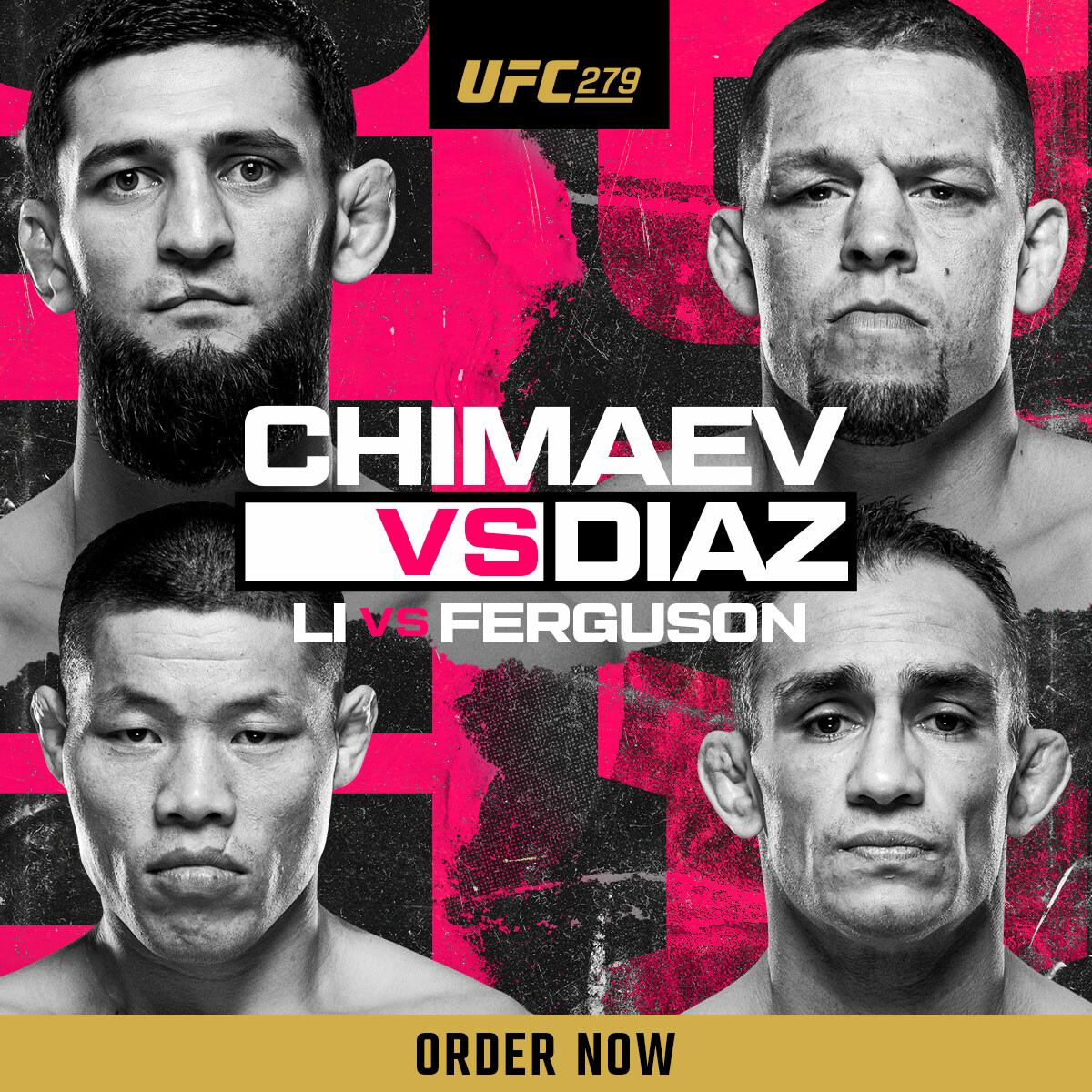 UFC 279 takes place Saturday, September 10 from T-Mobile Arena in Las Vegas
Canadian Veteran Takes Measured Approach To Keeping His Streak Alive At UFC 279
In A First-Of-Its-Kind Global Partnership, UFC And IRL Launch “Join the Conversation” And “Social Tagboard” Content F
UFC Collectibles Is Giving You An Unparalleled Opportunity To Feel Closer To The American Athlete…With An Added “Surprise”
Take a slow motion journey through one of the wildest pay per view events in UFC history
Relive some of the best submission finishes to date among the 125-lb division.