After a loss last week Tyde will need a miracle to overcome Elevate.
Three more maps will take place tomorrow in the South Division of the Asia Pacific League as the seven-team tournament sees its second play day. Here’s a rundown on what to expect this week: 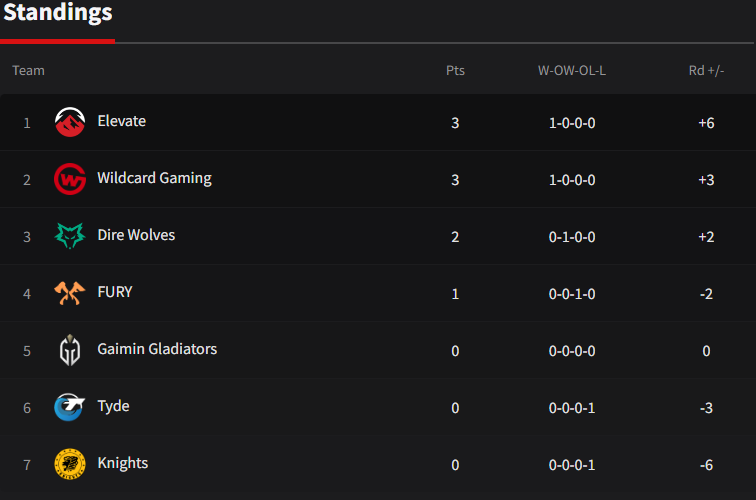 After having week one off, Gaimin Gladiators will face APAC South’s second-lowest positioned team this week, while Wildcard hope to win a second game in a row with their two new players.
Knights had an awful opening game against Elevate in their debut match with SpeakEasy. This week, though, they’ll hope to get a result against a much easier Thai opponent, FURY.
Finally, the match of the day is undeniably Elevate vs Tyde, as the division’s best team of 2022 faces the best of 2021. Elevate demolished Knights last week. Can they continue this run? Tyde, meanwhile, lost their debut with their two new players and will have a very tough fight on their hands to make up the difference here.

Let’s take a brief look at what’s in store for us:
Here’s a rundown of results between the Thai Elevate roster and the Tyde lineup, previously known as Invictus Gaming and Giants Gaming:
While Tyde do have the advantage on paper, the most notable thing here is the three 8-7 score lines in a row that have occurred across their last three meetings. There was nothing to separate these two giants of SEA Siege.
Unfortunately, these figures really don’t mean much anymore. Two Elevate players and four Invictus players have all left since their Stage 3 meeting last year — there are now more members of iG’s Sweden Major roster on Knights than Tyde.
We’re still getting to know the latest mixed APAC Tyde roster, and they’re still trying to get everything together.
After finishing in the mid-table for the last two stages, the Tyde roster made two changes, adding Tex “Tex” Thompson from Fnatic and rookie Hafiz “ShibeNuts” Yahaya.
In their debut game, they lost against Wildcard, 7-4. Their entry record was particularly shocking, as they had the opening death eight times in the 11 rounds.
Two of their four round wins started with an opening kill, showing how important this metric is. Wildcard also managed to get the plant down three times in six rounds, compared to zero in five for Tyde.

The upside is that the bad individual performances came from the two very experienced players, who have shown they can perform. ShibeNuts, statistically, had a perfectly fine debut, while Tex was the only one able to hold his own on entry.
The Thai wonderkids demolished Knights in a 7-1 scoreline. There’s very little to take away from this other than Elevate still look great even under LaXInG’s North Akerican eye. There’s been no early-stage dip that we’ve seen from the likes of G2 and Oxygen in other regions and the lack of player changes means that Elevate can theoretically cruise their way to another Major appearance.
Three 8-7s in a row means this meeting between Elevate and Tyde will always be one to watch, but it’ll be incredibly impressive if Tyde can recover to even get a single point out of this matchup.
© 2022 SiegeGGTerms & Privacy